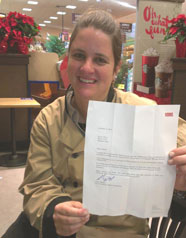 Sara Thiel is a valued employee of Vons/Pavilions! In October, 2014 Sara received a letter from Vons/Pavilions’ Vice President of Retail Operations Andy Barker, who personally thanked Sara for making a difference. Her commitment to customer service was recently recognized in a customer receipt survey. Her dedication to customers helped the store achieve an overall satisfaction rating. Taking care of the customers has always been Sara’s top priority.

Sara was hired by Vons/Pavilions’ grocery store in Mission Viejo in January of 2009, as a Courtesy Clerk. With job coaching support from Vocational Visions, Sara quickly mastered her job duties. In 2013 Sara expressed her interest to work in the floral department. She loves working in this department. Sara has earned the respect of her co-workers with her perfect attendance, being a great team player and her willingness to lend a hand wherever help is needed. Currently, Sara is also assigned as the stores representative for the “Five Dollar Friday” weekly grocery sampling sales deal!
Sara has many interests outside of work. She is very active in sports and has been competing in the Special Olympics since 2003. Among her many accomplishments, Sara earned two silver medals at the 2007 Special Olympics World Games in Shanghai.

Your Support Makes a Difference!

When you make a gift to Vocational Visions you are supporting Sara and the many participants that Vocational Visions serves each and every day. With your donation we can continue to provide the services needed for job placement and job development. Sara loves her job; you can help other Vocational Visions participants find work in their local community and reach their personal goals for greater independence just like Sara did.
Please consider a donation to Vocational Visions and our eight programs that assist more than 500 adults with Intellectual/Developmental and other disabilities each year. Throughout our 40 year history, we have assisted individuals like Sara and thousands of other men and women with your support. Her success story is simply one of the hundreds happening everyday. 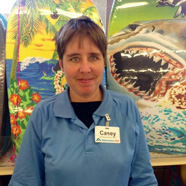 A loyal and dedicated Albertsons employee since November 2004, Casey Peterson achieved her second ‘Employee of the Month’ award in May 2014! Casey began her journey with Vocational Visions in May of 1996 as a participant in the Work Activity Program where she learned important work skills and how to be a valued employee.

In 2004 Casey jumped at the opportunity to transition from the Work Activity Program to a position with the Albertsons Grocery chain. Casey was and continues to be excited because her job is helping her to achieve her goals of earning money and learning to be as independent as possible. Casey’s dream is to move into her own apartment one day.

Casey can be seen at Albertsons bagging groceries, retrieving carts in the parking lot, sweeping the sales floor, maintaining cleanliness of restrooms and most importantly, providing quality customer service.

There has yet to be a day when Casey has not stepped out of bed and been excited to go to work. She is known for her quirky and loveable personality and she sees the best in everyone. Casey not only views her co-workers as friends, but as family. Her co-workers feel the same way.

Her job coach reports, “Casey is always progressing at her job.” She is a community asset at the Albertsons in Dana Point. Her recognition is well earned! Congratulations Casey!

Please make a donation today! Supporting Vocational Visions and our eight programs assists more than 500 adults with Intellectual/Developmental and other disabilities gain independence and build meaningful lives. Your donation allows us to continue to offer our outstanding services by filling the gap between state funding and the real cost of quality programs.

Supported Employment participant Lymari Breen has reached a big milestone! As of April 26, 2013 she has been employed by   Albertsons grocery stores for 20 years. In the coming weeks, Lymari will be recognized for her achievement by store management.

Lymari is a native of Irvine and a 1988 graduate of University High. In the years following high school, Lymari worked in day care and also for Mervyn's department store. In 1993, she began work as a courtesy clerk for Lucky's Market in Irvine. During seven years with Lucky's, Lymari progressed from courtesy clerk to a deli position.

In 1999, Lucky's Markets were bought by Albertsons and in 2000 Lymari transferred to the Mission Viejo store at Muirlands and La Paz. She spent the next four years working as a courtesy clerk and then in 2004 she transferred to the Ladera Ranch store. She is very proud to have been at her current store for almost nine years. Lymari proved her ability to handle a variety of tasks and was promoted several years ago to general merchandise clerk by her store director.

Today, Lymari can be seen at work performing her duties and greeting all of her customers with a smile. She is truly an asset to her employer and an inspiration to us all!